"If I had asked people what they wanted, they would have said faster horses." - Attributed to Henry Ford

Leak testing in the Automotive industry takes on many forms and is used for many reasons. The level of leak testing has grown significantly over the years due in part to more regulations and the increased complexity of the parts used in the cars.

Leaks discovered after a component is in a vehicle hurt your bottom line as well as your brand. Reduce warranty costs and recalls due to quality issues related to leakage.

Greater fuel economy brought with it more complex hose technology with many more parts - all needing to maintain leak integrity. What was once a simple aluminum hose with connectors on either side has morphed into multiple braised point aluminum hoses and even with hoses within hoses. Previously used leak tests used are no longer adequate for newer and more complex parts.

As the complexity of parts increase so does the costs to produce them.& In many cases the stacked costs of subcomponents to the finished product create scrap changes for suppliers. Previously, suppliers would leak test an entire assembly after it was produced.; If a leak was detected the part would be reworked or in some cases scrapped. But with an increasing number of costly subcomponents used in these assemblies, rework is costly and scrapped parts are unacceptable. Thus, there is a greater need to verify the leak integrity of the subcomponents before the full assembly is complete.

Helium is commonly used for leak testing but is ill-suited with the presence of rubberized materials and some plastics. Higher pressure is an effective method to detect leaks faster but will not work with products that have components that are designed to only withstand a few pounds of pressure. These are becoming more common with examples like the cap-less fuel lines now present in automobiles.

Another factor driving the need for leak testing is the ever-present need to reduce costs in the production of parts used in the cars. Parts and even parts of the chassis that were once made from single sheets of metal are now multiple injection modeled pieces of plastic coming together to form a single part. Leak testing is driven by the need to ensure that rain or other moisture does not enter the vehicle through the many connection points of the multiple parts. In this case, leak testing is necessitated by customer pressure rather than regulatory pressure.

There has also been an increase in the number of companies entering the leak detection space and the amount of misinformation provided to customers. There are customer horror stories of metal vacuum chambers leaking over time because welds are failing from cheaper, new to the market leak detection providers. Even a leading supplier of leak detection equipment has provided the following misinformation to their users, “applications (where) older methods are not sufficient, such as bubble test, pressure decay and differential pressure methods. These methods sometimes give a false sense of security.

It should be noted that this vendor does not produce equipment used for pressure decay nor differentiation pressure testing and both tests continue to be used with great success in the automotive industry, as well as other industries. Moreover, in many cases these are the only types of test that can be used because of the limitations described above.

In other cases, leak test vendors provide systems only to find out that their testing is not adequately detecting the leaks because of the methods used by their supplier. IHX (Internal Heat Exchange) tubing is a very good example of this problem.& It has been the experience of VIC that some suppliers pass bad parts as good because the testing methods and equipment they use have a design flaw. VIC has a patent pending on IHX leak testing.

Contact VIC for an IHX Test Audit of your Leak Test vendors’ equipment to find out if you are among those suppliers that are passing bad parts because of faulty test methods.

Test methods most commonly used in the automotive industry and in other industrial applications are as follows:

Pressure Decay: A pressure vessel is filled with air until it reaches its target pressure. Then the air source is cut to isolate the pressure. The decay (loss) of pressure over a specified period is measured; any loss in pressure indicates a leak.

Tracer Gas Ambient Pressure with Sniffer Probe: A part is charged (air is evacuated, and tracer gas is added) and an operator uses a hand-held leak tester to detect if Helium can be detected signaling a leak.

Tracer Gas Accumulation at Ambient Pressure with Clam Shell: Almost the same as a Tracer Gas Ambient Pressure with Sniffer Probe, with the difference being that the leak testing is performed at specific locations (test points) usually at weld points along a pipe/hose and a small enclosure wraps around these test points. A sniffer probe is inserted into the enclosure when closed. The enclosure opens and closes along one hinge making it resemble a clam shell, hence the name.

Tracer Gas Accumulation with Hard Vacuum: The test part is loaded into a test machine. Tracer gas escaping the test part is allowed to accumulate in an enclosure that surrounds the part at atmospheric pressure. The accumulated tracer gas is then mixed and sampled by a mass spectrometer.

Automotive PRODUCTS
Automotive Combustion Engine Solutions
Solutions for automotive power delivery leak testing. Combustion engine parts are critical in the Automotive Industry assembly process. To ensure these parts perform as designed they must be leak tested to ensure internal volume integrity.
Model No. Automotive Combustion Engine Solutions
Air
He
Automotive Drive Train Solutions
VIC offers custom leak detection solutions to meet your automotive drive train testing requirements.  Parts of the automotive chassis that were once made from single sheets of metal are now often multiple injection modeled pieces of plastic coming together to form a single part.  Leak testing is necessary to ensure that rain or other moisture does not enter the vehicle through the many connection points of the multiple parts.   Our custom solutions offer leak testing for various types of drive train applications, such as torque converters and clutches with multiple leak rates and sensitivity ranges.
Model No. Automotive Drive Train Solutions
He
Automotive Electric/Hybrid Vehicle Solutions
Whether it’s in response to soaring gas prices or global warming, more and more people are looking into fuel-efficient, cleaner-running cars, such as hybrid electric vehicles and fully electric vehicles. Just like with fuel rails and other automotive components that require leak testing battery assemblies, covers and trays are tested with a helium hard-vacuum system.
Model No. Automotive Electric-Hybrid Vehicle Solutions
He
Automotive Thermal Application Solutions
Solutions for automotive thermal applications. VIC offers custom leak detection solutions with custom tooling placed inside the chamber(s) design to meet your thermal leak testing requirements. Our custom solutions offer leak testing for various types of thermal applications, such as Radiators, Condenser/Combo Coolers, Charge Air Coolers (CAC)/ Exhaust Gas Recirculation (EGR) with multiple leak rates and sensitivity ranges. Custom solutions are offered in single, dual or IHX configuration.
Model No. Automotive Thermal Application Solutions
He
Ready
To Go 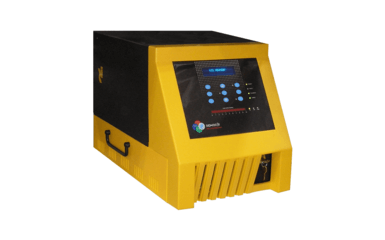 MD-490M Helium Leak Detector
The MD-490M is at the heart of VIC’s turnkey vacuum mass spectrometer systems which feature ease of service and its adaptability for system use.
Model No. MD-490M
He
-1 to -9 cc/sec
Ready
To Go 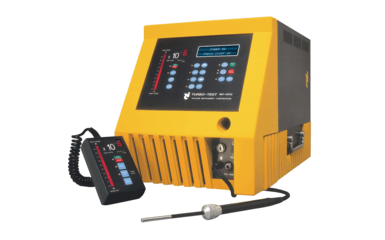 MD-490S Portable Dry Helium Leak Detector – Sniffer Model
The MD-490S is a leader among portable tracer gas leak detectors.  With a response time less than 0.5 seconds, sensitivity to 10-8 direct reading atm-cc/sec, and the ability to zero-out background, this is the most aggressive portable leak detector in the industry. The MD-490S is fully integrateable with our SmartChargeIII Evacuation and Backfill Station.
Model No. MD-490S
He
-3 to -8 cc/sec
Pascal. An Automotive Modular Fuel Rails Leak Test Solution
Pascal. A modular solution for fuel rails leak testing. Pascal is built from a standard fuel rail leak detection platform, specifically designed for low-and high-pressure fuel rail leak detection applications and is offered as a single or dual chamber configuration. The Pascal allows customers to use the same machine when they change programs; they just roll in and roll out carts with different tooling designs. This system is easy to maintain, and the total cost of ownership is the lowest in the market.
Model No. Pascal. Automotive Modular Fuel Rails Leak Test So
Air
He
Ready
To Go 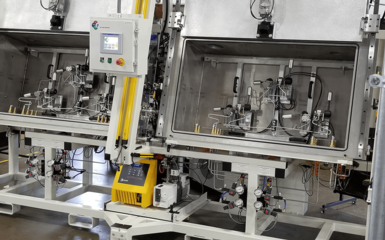 Cooper Standard is a leading global supplier of systems and components for the automotive industry. Mr. Carrasco stated that Cooper Standard Automotive chose to do business with VIC because they are “a very professional company and are experts in the field of leak detection”. Cooper Standard makes every effort to ensure that the components and materials used in their products maintain high-quality standards. That is why they chose VIC. “Using VIC for leak testing our products gives me the confidence I need to ensure we are passing along quality parts to our customers.”

Ruben Curiel has been in the leak detection business for over 25 years and using VIC equipment for over 20 of those years. “My oldest VIC machine is from 1996 and is still running”, said Ruben Curiel. Ruben reports they solved all their leak detection problems by switching to Vacuum Instruments Corporation. “The construction of the VIC chambers is much more robust and the quality of the welds is much better. We have been running the same machine for over 20 years with no leaks.” When asked why he has been working with VIC, Ruben shared, “I just like them. I can call at all hours. They just help me. Their support is highly recommended.“

Vacuum Instruments Corporation is a pioneer in providing state-of-the-art leak detection solutions for diverse applications and industries. Our systems have ensured the safety and performance of countless products that we use in our daily lives from the cars we drive to the air conditioners in our houses, the pacemakers in our bodies, and the satellites we launch into space.